Winter Show Results
The Sapphire Coast Orchid Club presented its annual winter show at Twyford Hall, Merimbula, from the 16th to 18th August. Visitors were treated to a spectacular display of the ever popular cymbidium orchids which were in their prime. A newer member, Brad Ford from Brogo, filled the Novice benches with a magnificent collection of classy Cymbidiums. Australian native orchids and a variety of exotics featuring Masdevallias, Paphiopedilums and Vandaceous supported the show.

The Grand Champion Orchid of the Show went to Phil Grech from Bairnsdale for a plant that he bred, his Australian Native Dendrobium Nanny Joy â€˜My Loveâ€™. This large plant supported ten spikes of pale yellow 50 mm flowers with a stunning magenta lip.

John and Irene Stubbs of Brogo always present outstanding Vandaceous orchids, their Rhyncostylis gigantea â€œspotsâ€ is no exception. This plant was awarded Champion Species, Champion Vandaceous and Reserve Champion. With three racemes of pink spotted petals with a deep pink lip this plant demanded attention. The Brogo growers went on to take the Champion Specimen with a Dendrobium speciosum featuring six foxtail racemes of large pale yellow blooms. They also presented the Champion Fern and Foliage with their Phlebodium aureum Fern.
Cymbidiums were the hero of this show and Eden growers Bob and Muriel bell did not disappoint winning the over 90 mm class with a spectacular Cym Golden Embers â€œGolden Tee Peeâ€™ which had five long racemes of 15 large deep yellow flowers with a distinctive red lip. In the 60 mm to 90 mm Class their Cymbidium Ruby Valley â€˜Clareâ€™ displayed its deep red flowers to perfection with an average of 25 flowers per raceme. And to round it off they took out the under 60 mm class with a very nice Cymbidium Sarah Jean â€˜Jenniferâ€™. This plant had nine well spaced racemes gently cascading with pale green flowers with their distinctive white lips. They also presented Masdevallia Tiger Kiss â€˜Cat Fightâ€™ a dark Orange flower with dark red striping to win Champion any Other Genera. Their success won the Sapphire Coast Orchid Club Winter Show Trophy for Most Successful Exhibitor a trophy that is very familiar to Bob and Muriel.
Merimbula grower Jeffrey Knox won the Paphiopedilum Class with his Paph. Highland Beauty and Keith Barrett the Laeliinae Alliance with Cattleya Mini Surprise â€˜Llewelynâ€™.
The Novice section was won by new member Brad Ford of Green glades who presented a number of well groomed Cymbidiums to the Judges and took out the prize with Cymbidium Lancashire Khan â€˜Debonairâ€™ a delicate pink flower with nicely displayed large flowers.
The Champion Floral Art was an innovative display featuring pale green Cymbidium flowers presented by Helen Fraser from Bega.
Congratulations to all winners, exhibitors and helpers for putting on another great show.

Sapphire Coast Orchid Club would like to thank our major sponsors Robert Smith Complete Furnishers of Pambula, and The Little Bouquet florists of Merimbula for their very generous support of our show. 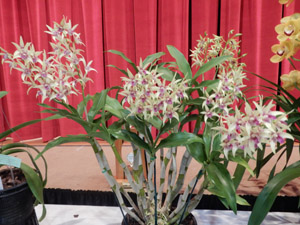 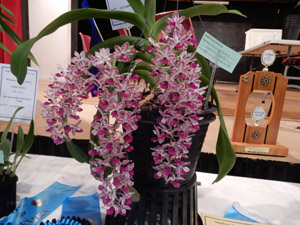 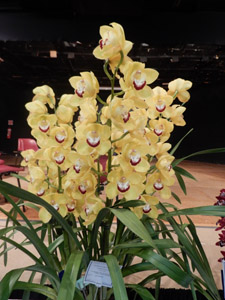 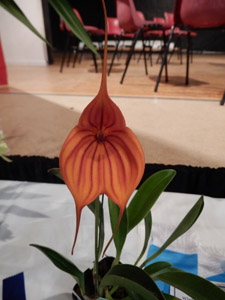 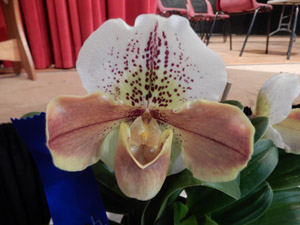 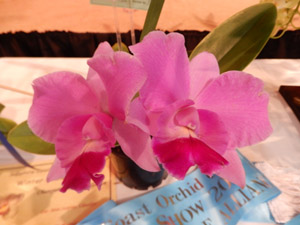 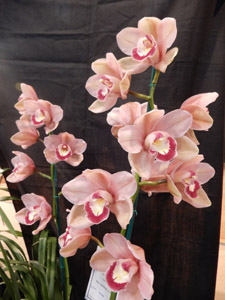 Cymbidiums were the heroes of this show.