The Sapphire Coast Orchid Club presented its annual winter show at Twyford Hall, Merimbula, from the 14th to 16th August. The hall was a blaze of colour as growers from all over the South Coast and as far afield as Wodonga put their best plants on display. The ever popular Cymbidiums provided the mainstay of the show, supported by a variety of other genera including Australian Natives, Masdevallias, Slipper Orchids and Cattleyas. Thank you to the many visitors, who came to enjoy our flowers and left so many positive comments.

The Cymbidium sections were hotly contested, with many quality plants vying for the judgesâ€™ attention. In the 90mm and Over section, Bobby and Muriel Bell from Eden had the edge with their superb Cym Lancashire Khan â€˜Debonairâ€™, carrying 3 racemes of perfectly presented pink flowers. This outstanding plant was also awarded Grand Champion Orchid of the show. Bobby and Muriel further won Champion Orchid Any Other Genera with their dainty Onc Twinkle â€˜Sweet Fragranceâ€™ and were winners of the overall pointscore, receiving the AOC Trophy. Congratulations Bobby and Muriel.

Michael Wood from Kalaru is making a name for himself for growing outstanding Australian Native orchids. His beautiful and very aptly named Dendrobium Tathra â€˜White Glow, carrying numerous pristine white flowers with a pink lip, was awarded Champion Australian Native or Native Hybrid, and Reserve Champion of the Show.

John and Irene Stubbs from Brogo were again amongst the winners, gaining Champion Seedling Other Than Cymbidium with their pretty Zygo Arter Elle Arunel x Arter Elle Essendon.

Champion Floral Art was won by Helen Fraser from Bega for her original basket arrangement featuring Cymbidium orchids.
Champion Fern or Foliage was won by Barbara and David Jones from Kalaru for their delicate fern Adiantum Raddianum ‘Triumph’.

Congratulations to all winners, exhibitors and helpers for putting on another wonderful show.
Sapphire Coast Orchid Club would like to thank our major sponsors, Robert Smith Complete Furnishers of Pambula, for their very generous support of our show. 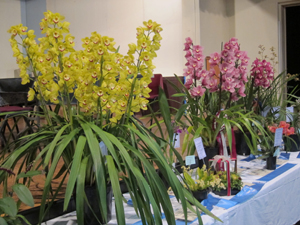 Cymbidiums at their Peak 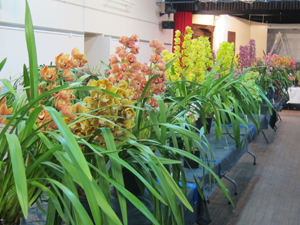 the quality was out standing 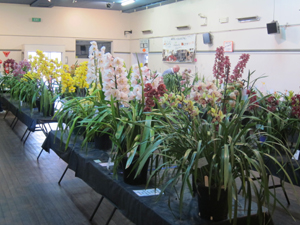