The Sapphire Coast Orchid Club presented its annual winter show at Twyford Hall, Merimbula, from 17 to 19 August. Visitors were treated to a spectacular display of approx 200 orchids, filling the hall with colourful blooms. Cymbidiums were again the mainstay of the show, with Australian natives and 'slipper orchids' also very well represented. The judges congratulated members for putting on a stunning show, which was one of the best they had seen this year.

Eden growers Bob and Muriel Bell grow their cymbidiums superbly, and the judges rewarded them with a raft of prizes, including four championships. Their beautiful yellow cymbidium One Tree Hill 'Beenak' was awarded Reserve Champion and Champion Cymbidium in the 60mm - 90mm class. They also won Champion Cymbidium Seedling with Cym White Valley x Khan Flame, and Champion Specimen Orchid with Cymbidium Valley Winter 'Ultimate', which carried 10 racemes of lovely pink blooms, displayed well clear of the foliage. Bob and Muriel came away with the overall point score and received the AOC trophy.

John and Pat Tanner from Pambula also had a very successful show, and gained two championships. Their Cymbidium Fair Delight 'Polar Bear' gained Champion Cymbidium in the 90mm and Over class, and at the other end of the scale, their gorgeous Cym Ice on Fire 'Nikkietta' won Champion Cymbidium Under 60mm.

Novice growers Wendy and John Tracey of Quaama won Champion Novice with their charming little species orchid Maxillaria cuculata., while Doug Schofield of Eden was rewarded with the Junior Championship for his very well presented Cym Ice on Fire 'Nikkietta'. The Floral Art was taken out by Kay Hewitt from Merimbula with a striking arrangement featuring cymbidium orchids. 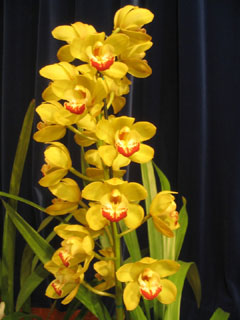 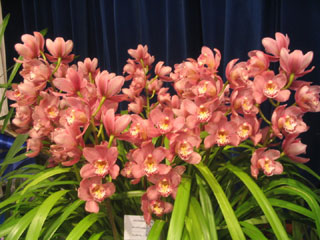 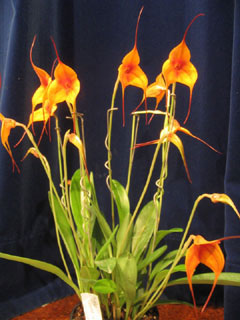 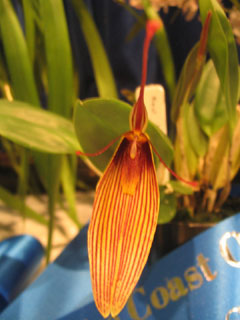