The Sapphire Coast Orchid Club's Great Winter Show held in Twyford Hall Merimbula lived up to its name with 287 plants placed before the judges, these include 125 spectacular Cymbidium orchids that filled the hall to bursting point. The judges commented on the quality of the presentation declaring it to be the best show seen in the area for several years. Grand Champion of the Show went to a small unusual orchid presented by Bodalla growers Ann Schramm and Ian Scott, their immaculate Dracula Quasimodo 'Jody" presented a problem to display because it flowers from the bottom of the pot, their attractive presentation added to the plant's beauty. Their plant was also awarded Champion Any Other Genera. Reserve Champion went to another small plant, Amesiella phillipinense, whose perfect white flower caught the judges' eye. This plant grown by Narooma growers Margaret and Don Hayes also was awarded Champion Species and Champion Vandaceous Orchid. The popular Cymbidium section provided a big choice for the judges who selected Anne and Brian Blackley's Alumination 'Truss' as Champion 90 mm and over. Anne and Brian are Merimbula growers who have bred many successful plants over the years. They continued their winning streak with success with the Champion Seedling, Merimbula Sands No 4 and the Champion Specimen, Merimbula Sands 'Goldie No1', a magnificent multi spiked yellow. Eden growers Muriel and Bob Bell took out the Cymbidium 60 - 90 mm with their very successful One Tree Hill 'Doris' and Joy and Bob Richardson of Tura Beach won the Champion under 60 mm class with the classic Gladys Whitesell 'The Charmer'. Dalmeny enthusiasts Rose and Ron Boyd enjoyed success in the Paphiopedilum Class with Paph (Winston Churchill x Sally Ann) x Wingtear 'Marie' and also in the Champion Laeliinae Alliance with a complex Laelia hybrid which was also awarded Champion Seedling any other Genera. Ron and Rose came away with the overall point score for the show and received the AOC trophy. The Australian Native section was very well contested with well known Brogo growers Irene and John Stubbs rewarded with Champion Australian Native or Hybrid with their Dendrobium Eureka 'Yellow Cake' x Gulgini 'Pink'. Novice grower Brenda Western from Ulladulla was successful with her presentation of SLC california 'Apricot' x Cattleya amethystoglossiia and the Floral Art was taken out by Kay Hewitt from Merimbula with a very attractive display featuring driftwood and orchids. Further information may be obtained by contacting the Publicity Officer. 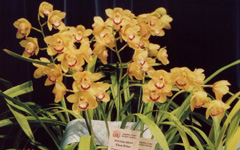 Champion Specimen of the show 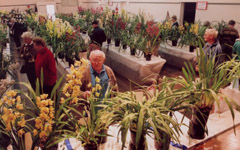