The Sapphire Coast Orchid Club presented its Spring Orchid Show at the Scout Hall, Bega, from  18-19 September. Visitors were treated to a spectacular display of Australian Native orchids, with many fine examples of Dendrobium speciosum (the rock lily) and a lovely selection of terrestrial orchids which rarely make it to the show bench. The ever popular Cymbidiums and a good variety of other exotic genera completed the display. The judging panel was impressed with the quality of plants on display, and the show attracted many positive comments from the visiting public.

Michael Wood from Kalaru is fast establishing his reputation as a grower of superb Australian Native Dendrobiums. For the second year in a row, he carried away the major prize. From among the many wonderful dendrobiums he put on display, his outstanding Dendrobium speciosum var. curv. ‘Daylight Moon’. carrying 17 arching racemes of shapely, pure white flowers, was awarded Champion Australian Native or Native Hybrid and Grand Champion of the show. Well done Michael, and congratulations.

Bobby and Muriel Bell from Eden are in a league of their own when it comes to growing cymbidiums. Number of flowers and presentation sets their plants apart. Their gorgeous Cymbidium Dorothy Stockstill 'Forgotten Fruits', carrying 14 racemes of pendulous red flowers, was awarded Champion Cymbidium Under 60mm, Champion Specimen Orchid and Reserve Champion of the Show. Bobby and Muriel also won Champion Cymbidium 90mm and Over with their beautiful Cym Lunar Kirra ‘Gleam’, which did its name justice with 8 racemes of bright yellow flowers carried high above the foliage. They also won Champion Laeliinae Alliance with Cookara Tropical Snowflake 'The Bells', and Champion Orchid Any Other Genera with a lovely yellow Masdevallia, name unknown. Bob and Muriel were victorious in the overall pointscore, and were awarded the Maurine Cochrane trophy.

David and Barbara Jones from Kalaru were awarded Champion Fern or Foliage with their Black Stem Maidenhair fern, and Barbara took out the Champion Floral Art with a beautiful arrangement featuring cymbidium blooms.

Margaret Wong from Mallacoota received a cultural award for her superb specimen of Dendrobium gracillimum.

Congratulations to all winners and exhibitors, and thank you to all who helped make this show such a wonderful success.

Thank you to all our sponsors, in particular our major sponsor, Southern Farm Supplies of Bega. 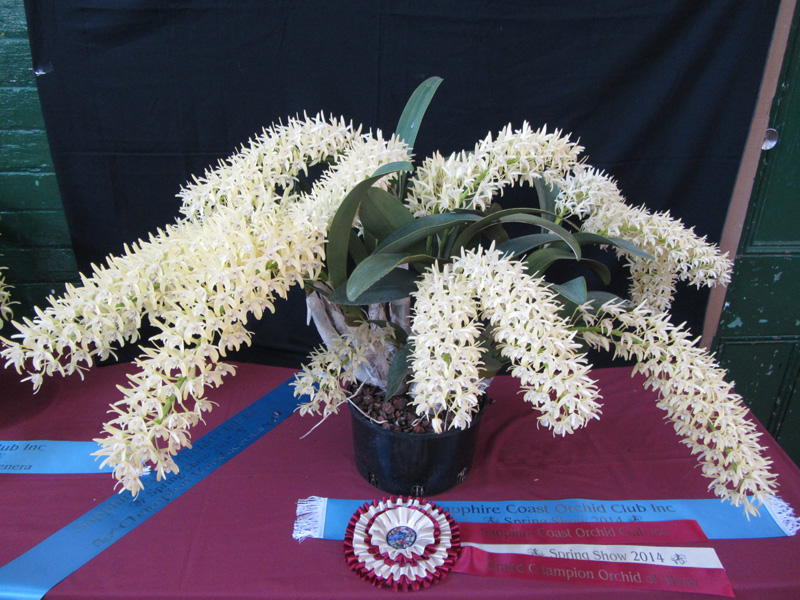 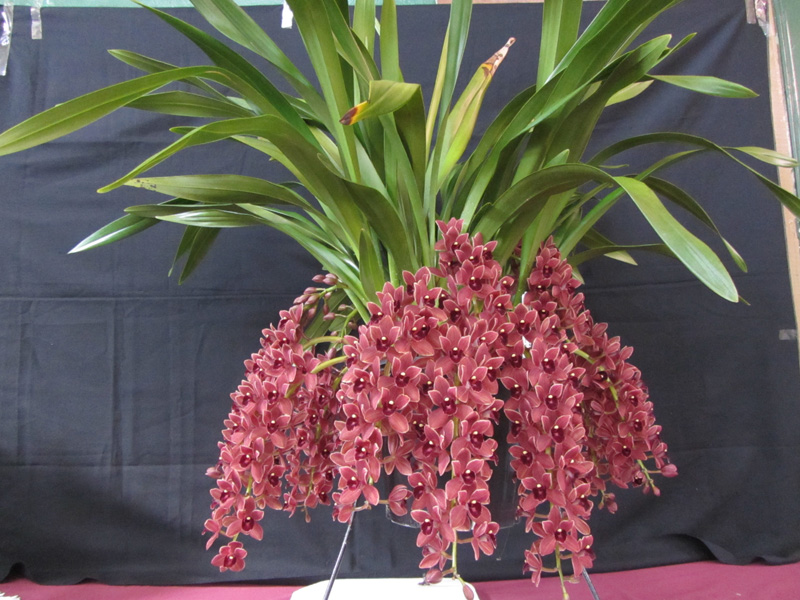 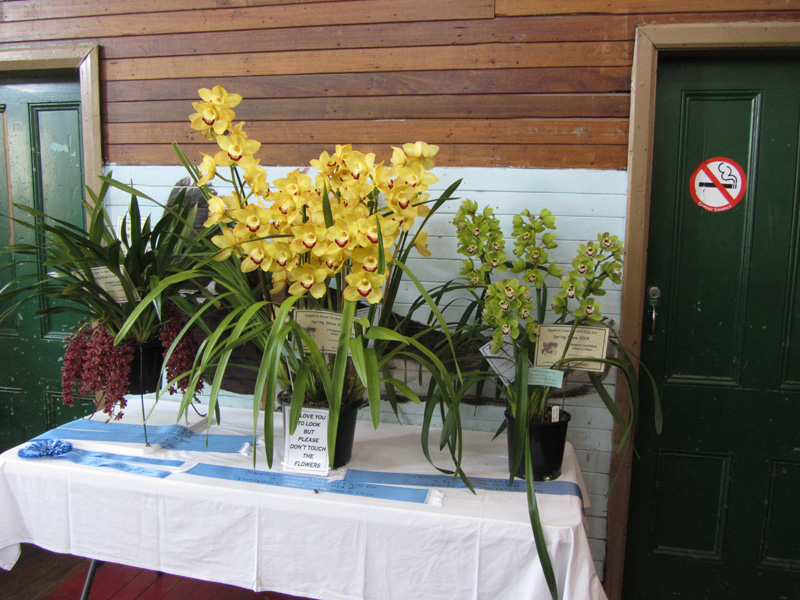 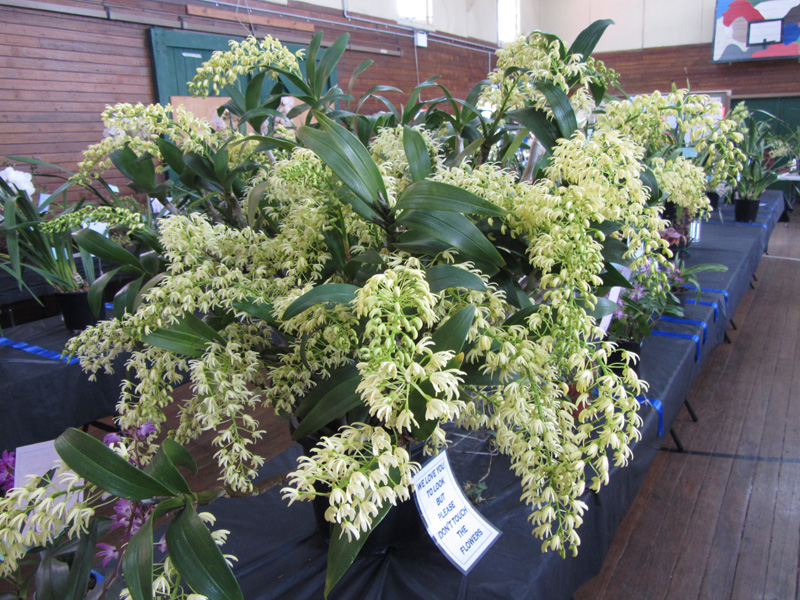 Australian Native orchids on the bench

Australian Natives at their Best 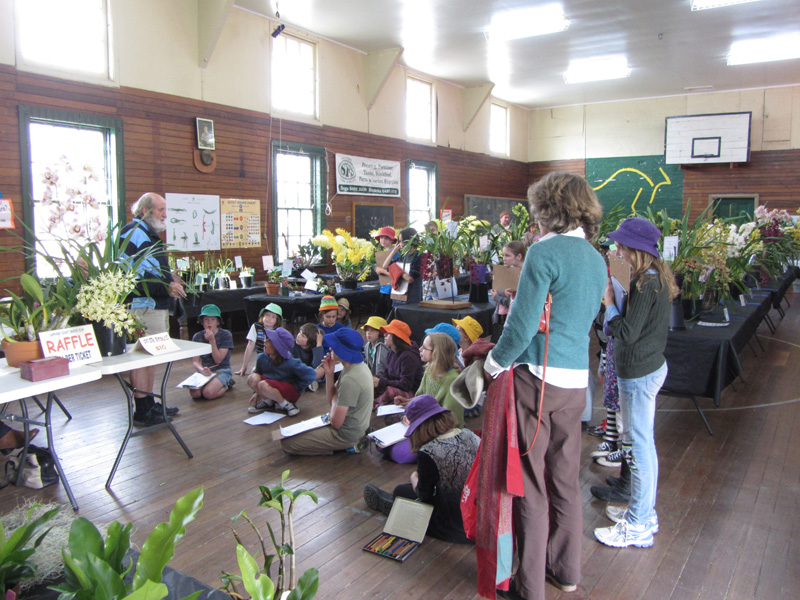 Schools in with David Jones 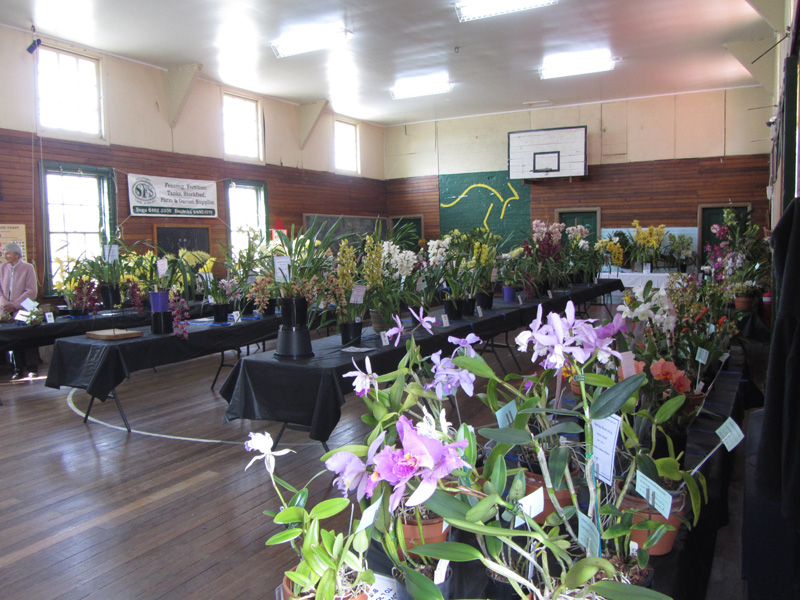