The Bega Scout Hall was filled with colour when the Sapphire Coast Orchid Club presented its Spring Orchid Show from 13-14 September. This is the time for Australian Native orchids, and there were many wonderful plants on display, filling the hall with their heady perfume. Cymbidiums were well represented, supplemented by a number of other exotic genera such as slipper orchids, Masdevallias, Cattleyas and Oncidiums.

John and Judy Baldock from Batemans Bay made the trip down south for the first time, and promptly collected the major championship with their much admired Australian Native orchid Dendrobium Kayla ‘Kilaben x Den speciosum var curvicaule ‘Daylight Moon’. This plant carried 4 racemes of golden yellow flowers of exceptional shape and substance, and the judges awarded it Champion Australian Native or Native Hybrid and Grand Champion of the Show. They also gained Champion Specimen Orchid with an unnamed pink Austalian Native Dendrobium. Congratulations John and Judy.

As always, the Cymbidium sections were well contested. Bob and Muriel Bell again graced the Champions table with their superbly grown and presented Cymbidium Valley Splash ‘Awesome’, carrying three very tall racemes of pink and white flowers. This plant was awarded Champion Cymbidium 90mm and Over and Reserve Champion of the Show. Bob and Muriel also won Champion Cymbidium Under 60mm, with their beautiful Cymbidium Sarah Jean â€˜Ice Cascadeâ€™, which did its name justice with 8 racemes of pendulous white flowers displayed all the way around the plant. They also won Champion Laeliinae Alliance with their beautiful Cookara Tropical Snowflake â€˜The Bellsâ€™. Bob and Muriel were victorious in the overall pointscore, and were awarded the Maurine Cochrane trophy.

John and Irene Stubbs from Brogo took out Champion Species Orchid for their very large and impressive Dendrobium speciosum, carrying 13 racemes of countless white flowers. John and Irene had more success with their colourful Colmanara Pagan Lovesong, being awarded Champion Seedling Other Than Cymbidium.

Barbara Jones from Kalaru again showed her flair for flower arranging, and took out the Champion Floral Art with a beautiful arrangement featuring white cymbidium blooms.

Congratulations to all winners and exhibitors and thank you to all who helped make this show such a wonderful success.
Thank you to all our sponsors, in particular our major sponsor, Southern Farm Supplies of Bega. 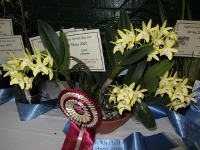 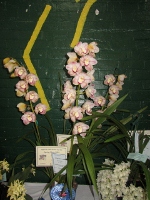 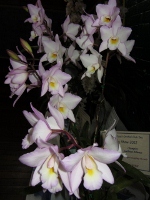 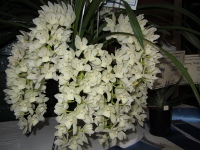 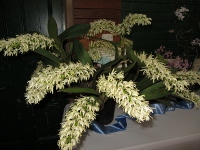 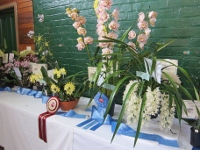 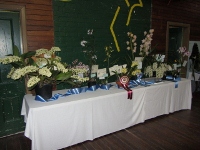 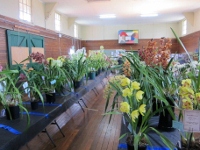