A riot of colour transformed the Scout Hall when the Sapphire Coast Orchid Club presented its Spring Orchid Show from 16-17 September. Visitors were treated to a spectacular display comprising a variety of genera, from the ever popular Cymbidiums, Australian Natives and Slipper orchids, to the less frequently seen Masdevallias, Cattleyas and Oncidiums. It was wonderful to see such a strong showing from novice and junior growers, with some very fine plants exhibited in these classes. Complimenting the orchids were a number of imaginative and elegant floral arrangements.

Shirley Bedingfield from Merimbula grows her orchids to perfection, and her outstanding specimen of Dendrochilum tenellum was awarded Grand Champion of the show, as well as Champion Species and Champion Specimen Orchid. This plant carried countless racemes of delicate flowers, the overall effect resembling a fountain. Shirley was also victorious in the overall pointscore, and was awarded the Maurine Cochrane trophy.

Australian Native orchids are at their best at this time of year, and there were many wonderful plants on display, filling the hall with their heady perfume. Father and daughter team of John Stafford and Tracey Ainsworth from Kalaru were awarded Reserve Champion and Champion Australian Native or Native Hybrid of the show, for their beautiful Dendrobium speciosum National White, which carried three racemes of perfectly presented pristine white flowers. They were also successful with their very well flowered Rhyncostylis gigantea. This plant is no stranger to the Champions table, and was awarded Champion Vandaceous Orchid.

Champion Floral Art was won by Helen Fraser of Bega, with her imaginative and elegant arrangement featuring strips of bark and Dendrobium orchids.

Congratulations to all exhibitors and thank you to all who helped make this show such a wonderful success.

Thank you to all our sponsors, in particular our major sponsor, Southern Farm Supplies of Bega. 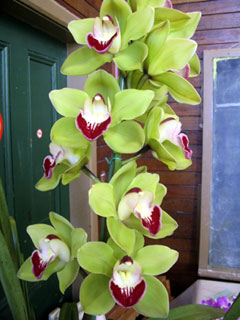 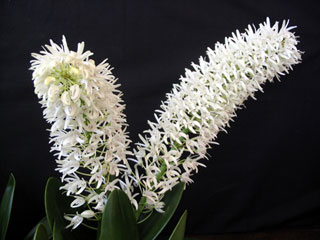 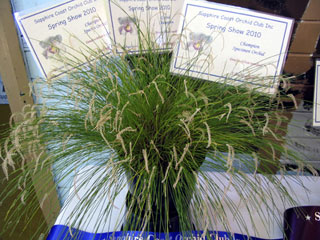 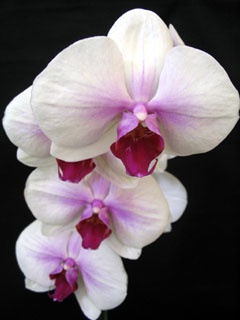