The Sapphire Coast Orchid Club presented it’s 2019 Australian Native Orchids Show at Twyford Hall Merimbula on 1st and 2nd November. This show is aimed at showcasing Sarcochilus orchids and Australian Cymbidium species and their hybrids. The increasing variety of colour that is being presented by Sarcochilus breeders has really enhanced this display.
Grand Champion Sarcanthinae Orchid and winner of the Shirly Bedingfield perpetual trophy was Austin Legler’s Sarco. Lyn ‘WR’ x hartmanii ‘Triple Red’, this plant was also awarded Champion Sarcochilus Hybrid. It’s stunning large white flowers with their deep red centre displayed on six graceful cascading racemes made an eye catching sight which was appreciated by both the judges and visitors alike.
Champion Any Other Orchid was a Soft Cane Dendrobium, Den. Hagorome Spring Beauty x Den. Sailor Boy ‘Shrasagi’ presented by Bob and Muriel Bell. The large pure white flowers delicately tipped with a flush of pale mauve was a picture of serenity and attracted a lot of interest from the public.
The Novice bench was well represented, and Champion Novice was awarded to Sarco Heidi grown by Myrle Danvers. This large plant was also awarded Champion Sarcanthinae Specimen it’s 30 or so gently arching racemes of crystalline white flowers which were set off by a tiny red centre was the centre of attention. It is clear that Myrle has found her niche with these plants and will give the Open growers some real competition next year.
The Species classes were not well represented but Champion went to Graham Gray with his Sarco hartmanii ‘Roberta’ x Red Snow’. A very good example of this species which is the backbone of many of the plants on show. Its crystalline white flowers with just a hint of red in the centre were displayed on gently cascading inflorescences’ which illustrated the appeal that this genus offers.
In the Cymbidium class the display of pendulous flowering plants was awe inspiring, from the ability of the owners to get them to the show to the wonderful display they provided brought a new dimension. Plants like Cym Black Stump with its almost black flowers and Cym Cricket with a curtain of graceful inflorescences really displayed their Australian heritage to advantage.
The show was well supported by some great Masdevallia’s with their vibrant colour and Soft Cane Dendrobiums which always provide an eye catching display along with a scattering of other late flowering plants to provide an interesting and well received show.
The Sapphire Coast Orchid Club would like to especially thank the Pambula and District Bendigo Community Bank for the generous support of our show. Thank you also to all exhibitors and helpers who made this show a success. 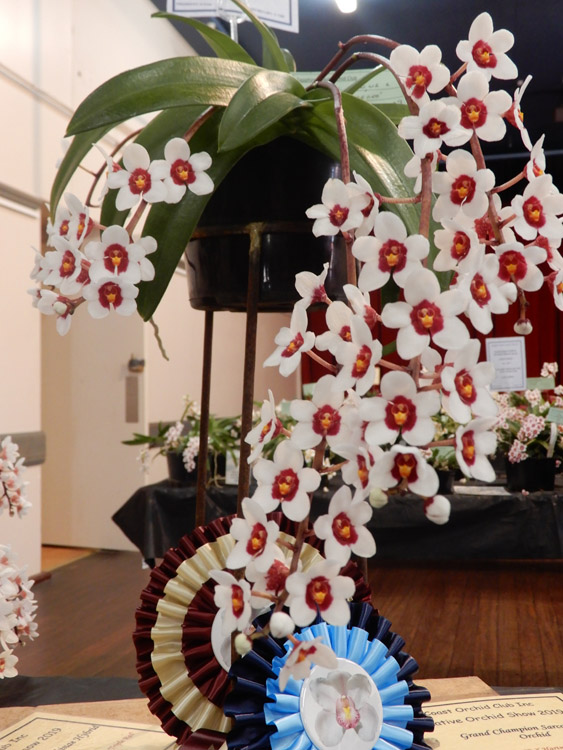 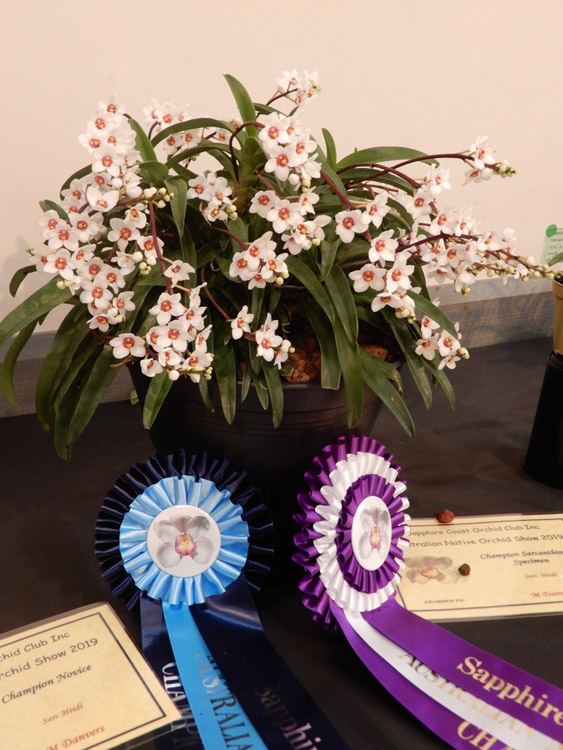 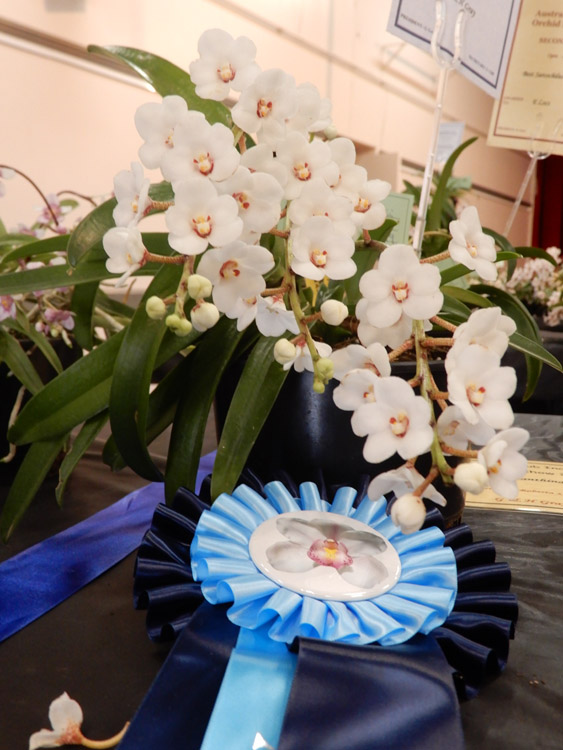 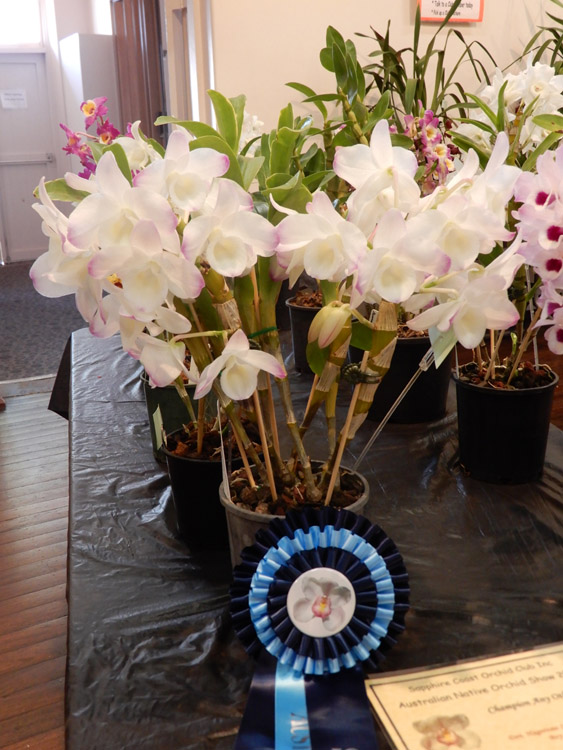 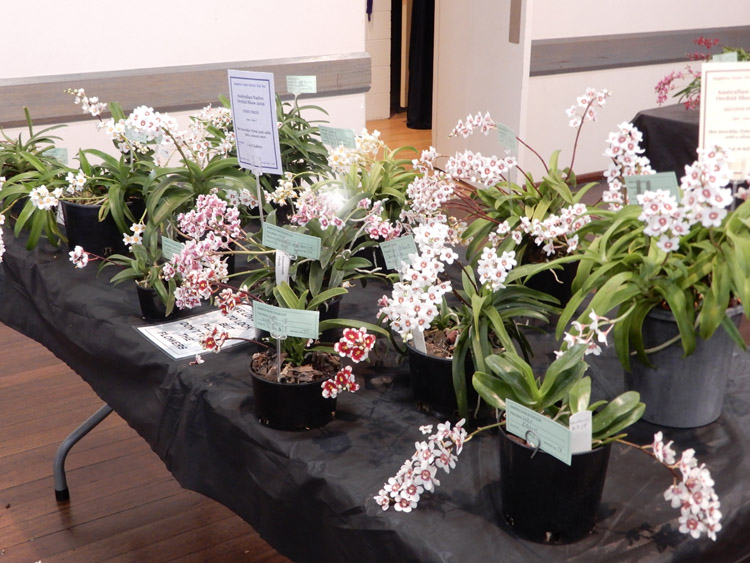 A table of Sarcs 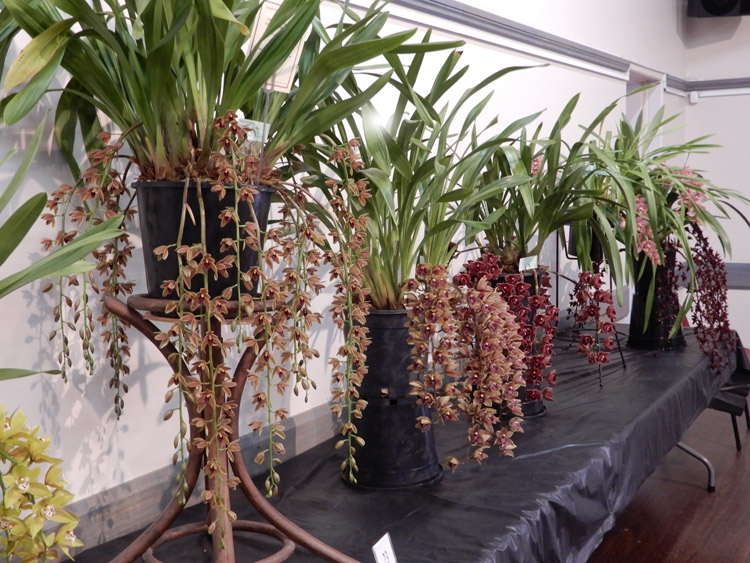