The Sapphire Coast Orchid Clubâ€™s Australian Native Orchid show was held on the 30th and 31st October at Twyford Hall, Merimbula. This show is dedicated to the dainty Sarcochilus Orchids which are rarely seen at the regular orchid shows, and they made a colourful display. They were complimented by a variety of exotic orchids, with a particularly good showing of Masdevallias and some eyecatching pendulous Cymbidiums.
Grand Champion Sarcanthinae Orchid and winner of the Bev & George Parker Perpetual Trophy was Sarc hartmannii â€˜White Gumsâ€™, grown by Michael Wood from Kalaru. The plant carried 12 racemes of shapely, white flowers with a touch of red in the centre. This orchid was also awarded Champion Sarcanthinae Species. Michaelâ€™s potful of Sarc. Fitzhart â€˜Pandaâ€™, carrying over 40 cascading racemes of white flowers was an impressive sight, and gained Champion Sarcanthinae Specimen.
Shirley Bedingfield from Merimbula won Champion Sarcanthinae Hybrid with her lovely white Sarc Heidi ‘Dusty Pink’ x Sarc Jewel ‘Dungog’. Shirley also won the overall pointscore.
John and Irene Stubbs from Brogo won Champion Any Other Orchid for their outstanding Phalaenopsis Chian Ven Pearl, which carried 6 large white flowers perfectly arranged along the stem.
Merle Danvers won Champion Novice with her beautifully grown Sarc Heidi, which made a lovely display with 18 racemes of white flowers with a red centre.
The Sapphire Coast Orchid Club would like to especially thank the Pambula and District Community Bank for their generous support of our show. Thank you also to all exhibitors and helpers who made this show a success. 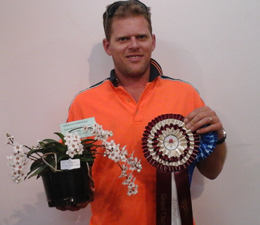 Michael Wood with his Grand Champion 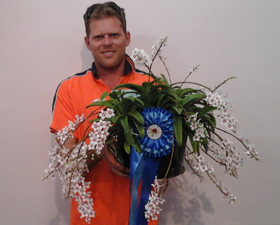 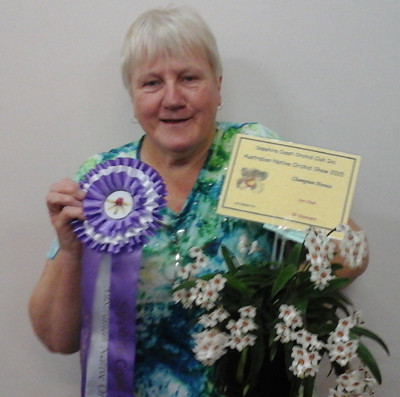 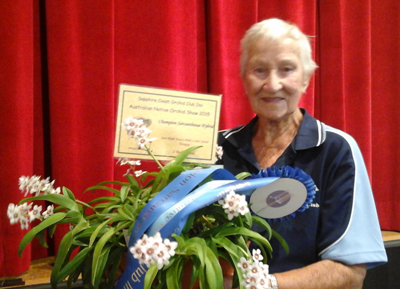 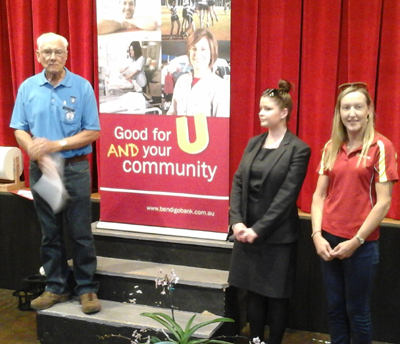 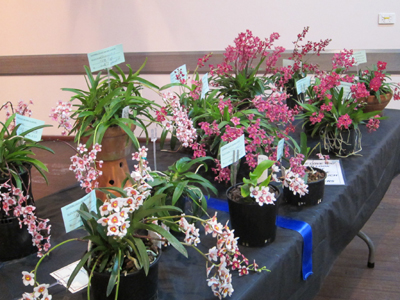 Some of the Reds 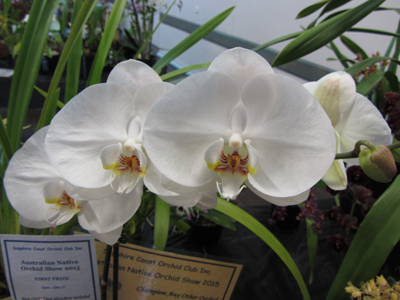