The Sapphire Coast Orchid Club presented its annual Australian Native Orchid Show at Twyford Hall, Merimbula on the 7th and 8th November. A feature of this show are the rarely seen Australian native Sarcochilus orchids. These little gems are becoming more and more popular as selective breeding increases their flower size and colour range. Many well grown specimens were on display, covered in flowers of pure white, white with red centres, all shades of pink, red and even yellow. The native orchids were well supported by a range of exotics, including cymbidiums, softcane dendrobiums and cattleyas.

Another rarely seen Australian native orchid is Cymbidium suave. It is notorious for being difficult to maintain in cultivation, and even more difficult to breed. Luckily, local grower Anne Willis grows this pretty orchid very well, and we were fortunate to have Anne’s display of 5 historic Cymbidium suave crosses, made by the late Dr Seaton. Anne’s display included Cymbidium Jumbuck, Dean Roesler ‘Jaffa’, Tennis, Koala ‘Cutie’ and Bunyip.

Another feature of this years show was a display of Bonsai by expert David Hof of Merimbula.. David grows all his bonsai from seed or cuttings. Some of the specimens in his collection are over 30 years old and are truly spectacular.

Grand Champion of the show was won by Shirley Bedingfield from Merimbula with her very well grown Sarcochilus Fitzhart x Sarcochilus Mavis, carrying 8 racemes of pristine white flowers with red speckled centres. This plant was also awarded Champion Sarcochilus Hybrid. Capping off a very successful show for Shirley, she was the winner of the overall pointscore for the second year in a row.

Further information may be obtained by contacting the Publicity Officer 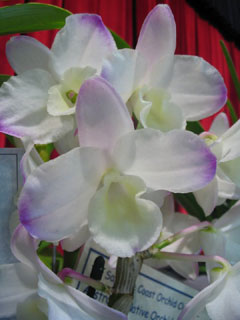 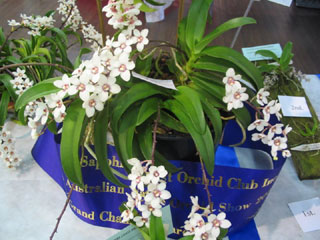 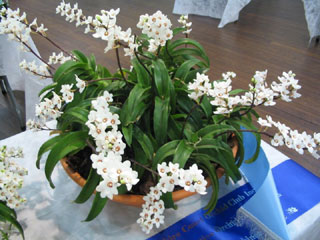 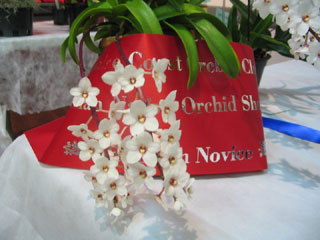