Sarcanthinae orchids were on show at Twyford Hall Merimbula for the Sapphire Coast Orchid Clubs 2nd show for these little known Australian gems. Over 80 Sarc's and 50 other species were placed before the judges.  Norma and John Stafford, well known growers from Kalaru, presented a seldom seen Peristerchilus Olive Grace which took the judges eye. This difficult to grow plant is about 12 years old and had 5 spikes of around 28 dainty mauve spotted flowers. It so impressed the judges that it stole the show being awarded Best Sarcanthinae Specimen, Best Sarcanthinae Hybrid and Grand Champion of the Show. Staffords were also the successful exhibitor of the Best Sarcanthinae Species with their Peristeranthus hillii, the bow tie orchid. This plant together with their other successes gave the Staffords Overall Pointscore Winners of the show.  Joy and Bob Richardson of Tura beach were awarded Best any other Orchid for their Wilsonaria Kendrick Feather Hill, a tall dark red spike with showy well displayed flowers.  In the novice section Margaret and John Perry of Eden were awarded Champion Novice for their Cymbidium Cricket, a magnificent display of 12 pendulous spikes of olive green flowers. This plant so impressed the judges that they also awarded it a Cultural Certificate.  Two entrants provided impressive displays of other species, Brian Blackley's Oncidium display included a number of species that are seldom seen on the show bench. His Oncidium leuchochilum had a flower spike over 2 metres tall! He also displayed an Oncidium auranium which is very rare in Australia, the flower spike, over a metre long was adorned with 200 4 cm cream and tan flowers.  Shirley Bedingfield's Masdevallia display showed these small colourful plants to perfection. The table was a blaze of colour from deep purple to bright orange and all shades between. The judges awarded both exhibitors a Special Commendation.  The judges noted that it had not been an easy year for Sarc growers and some flowers showed the ravages of the recent warm wet weather but it was encouraging to see these less commonly known species presented on show.  Further information may be obtained by contacting the Publicity Officer. 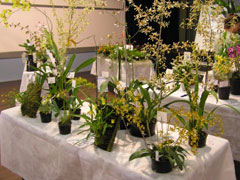